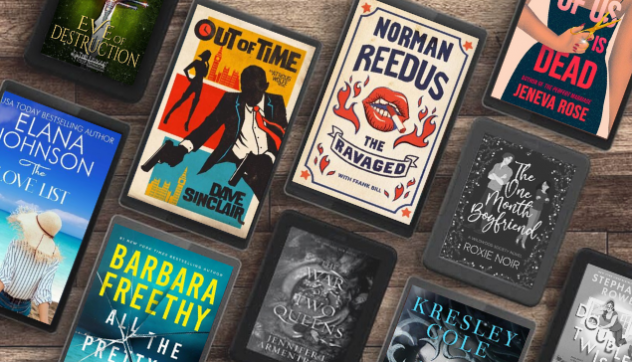 It’s been a banner year for self-publishing and the independent author community, which makes choosing only 10 favorite indie eBooks of 2022 (so far) a difficult task. But choose we did! And we should say based on these amazing titles, we can’t wait to see what the rest of the year brings. So grab your NOOK (or open the B&N NOOK app) and stock up that tbr pile.

The Ravaged by Norman Reedus

Jack’s dying mother told him, “Run and never look back.” He spent his life amassing wealth, but after losing his family, he has no one to share it with. Alone with his demons and a backpack, he heads to South America where Hunter soon learns of his father’s death in a mysterious fire. Biker buddies Nugget and Itch ride with him cross-country, while stories from his father’s life help ease the struggles of small-town Americans. Seventeen-year-old Anne flees Tennessee after her older brother attacks her. She whacks him with a skillet and hops a freight to Alabama with her best friend. Along the way, they build friendships, uncovering something they never had: family.

What Readers are Saying: “I like that each chapter is about a different character… I’m really interested in seeing where these characters stories go. Great job Norman!!” – Amandalc2, B&N Reviewer

The War of Two Queens (Blood and Ash Series #4)

The War of Two Queens by Jennifer L. Armentrout

Casteel Da’Neer knows the magnitude of what the Blood Queen has done is almost unthinkable. Nothing will stop Poppy from freeing her King and destroying everything the Blood Crown stands for. With the strength of the Primal of Life’s guards behind her, and the support of the wolven, Poppy must convince the Atlantian generals to make war her way. Together, Poppy and Casteel must embrace traditions old and new to safeguard those they hold dear. But war is only the beginning. To end what the Blood Queen has begun, Poppy might have to become what she has been prophesied to be—what she fears the most.

What Readers are Saying: “JLA is truly a master of high fantasy and fierce (and ferocious) characters. This series just keeps getting better with every book.” – Sam The Fangirl, B&N Reviewer

All The Pretty People

All the Pretty People by Barbara Freethy

Ten years ago, I was seventeen, spending summers with my wealthy family and friends on Hawk Island. One terrible night, I blacked out. The next morning, my best friend, Melanie, was gone—vanished without a trace. Today, I go back. Return to the island. To my sister’s wedding. Back to a group of privileged people with whom I’ve never belonged. To my best friend’s brother, a man who hates us all. And back to secrets that someone will kill to keep. A storm is coming. This is a storm that will cut off the island from all hope of help. A storm that could allow a kidnapper to escape or a killer to murder again. A storm that will wash away all the lies and deception and reveal the true faces.

The One Month Boyfriend: An Enemies-to-Lovers Romance

The One Month Boyfriend by Roxie Noir

It’s a simple agreement: for one month, Silas is my boyfriend of convenience. Once this is over, we’ll go our separate ways. I need some arm candy to prove to my ex-fiancé that I’ve moved on. He needs his old-fashioned boss to think he’s ready to settle down. Perfect, right? Except for one minor detail: we can’t stand each other. He’s the beloved golden boy. I’m the awkward new girl in town. It would be the worst idea ever, except… everyone falls for it. That’s the thing about pretending to date someone: it looks just like real dating. And the other thing about pretending to date someone? It feels like real dating. One month. Then this charade is over.

What Readers are Saying: “The One Month Boyfriend is a perfect blend of angst, drama and steam. There’s lots of witty banter between Silas and Kat throughout their fake relationship but it’s not all fun, as the once enemies aren’t without their demons. I loved it!” – JillFK, B&N Reviewer

Out Of Time: An Atticus Wolfe Novel

Out of Time by Dave Sinclair

As an MI6 spy in 1963, Atticus Wolfe should be enjoying everything the swinging sixties has to offer. But he’s not. That’s because Atticus Wolfe is from the 21st century. Accidentally torn from present day and flung into 1960s London in the midst of a cultural revolution, Atticus must acclimatise to a time not his own. Although he’s shocked by bigotry decades out of step with his sensibilities, not everything is unfamiliar – like finding a mole inside MI6. Atticus must take down a clandestine Soviet agent on the front lines of the Cold War, hunt the terrorist who inadvertently sent him back in time and maybe, just maybe, find a way home.

What Readers are Saying: “Oh wow! I loved this book… I loved the whole concept of a modern day spy trying to apply his craft by going in his words ‘Old school’.” – Ju Ju, B&N Reviewer

Eve of Destruction by Sherrilyn Kenyon

Eve Erixour is a mercenary with a past no one would envy and more enemies than anyone should have. So when she gains the attention of a League assassin, she considers it par for the course. But Jinx Shadowbourne isn’t after Eve. Someone has it in for him and his brethren. High-ranking assassins are falling, and Jinx is convinced one of their own is selling them out. He’s on the trail of his key suspect when fate throws him headfirst into Eve’s life. Now the two of them have to find the League leak and plug it or neither one of them will live to face another enemy, and the ones they love, and the universe at large, will be left alone to face a power-crazed madman.

What Readers are Saying: “Loved it and didn’t want to put it down… I found this to be a fast paced book and well written. The characters are well developed and I want to read more.” – Lydia67, B&N Reviewer

Beatrice Callahan loves lists. Sometimes she even makes a to-do list of things she’s already done, just to go check, check, check and feel accomplished. So it’s easy to understand why, when her divorce is finally final and her ex is all moved out, Bea takes a cool, close look at her life…and makes a list. It’s not exactly a bucket list. It’s a love list. After all she’s been through and all she’s lost, she needs time to relax, rest, and reset. On the first day she arrives in Hilton Head Island, she meets Grant Turner, the man whose house she’s renting for her fabulous beach vacation. Grant quickly becomes her tour guide and then a friend and then…more than friends.

What Readers are Saying: “The love list, list is a really fun idea for anyone needing to expand and explore, to add new things to keep life interesting… A breath of fresh air and a rededication to trying new things, like ‘later in life’ romances. I am excited to read who’s story is next!” – Leann, B&N Reviewer

One of Us Is Dead

One of Us is Dead by Jeneva Rose

Meet the women of Buckhead: Shannon was once the queen bee. But she’s been unceremoniously dumped by Bryce, her politician husband, and now she’s out for revenge. Crystal has stepped into Shannon’s old shoes and simply has no idea what she’s up against. Olivia has waited years to take Shannon’s crown. But to take it, she will need to use every trick in the book. As the owner of the most exclusive salon, Jenny knows her clients’ secrets and darkest desires. But who amongst these women will be clever enough to survive Buckhead—and who will wind up dead? They say that friendships can be complex, but no one said it could ever be this deadly.

What Readers are Saying: “This novel truly reads like a thriller and a binge worthy TV show mixed into one. We ALL enjoy diving into juicy rich-people drama.” – ShanKL, B&N Reviewer

Munro MacRieve never expected to find his mate, or to lose her just as abruptly. Driven to desperation, the ruthless warrior uses his enemies’ own powers to reunite with her—in the distant past. When a crazed werewolf crashes her wedding, Kereny “Ren” Codrina does what any cunning huntress would do: she captures him. Yet she finds herself softening toward the wounded beast—until he forces her into an incomprehensible future. As danger mounts, Munro will do anything to make her undying. But first he must convince his fiery mate that she belongs with him. If seduction means her survival, Munro will use every weapon in his arsenal to possess her—forever.

What Readers are Saying: “Could not stop reading this book!! Love Kresley and everything she writes! Excited to have her back.” – SaraB04, B&N Review

All Mia Murphy wants is an ordinary, law-abiding life. With her ex in prison, Mia is off to Maine to start over. Life is headed in the right direction…until she stumbles across a dead body during a slightly illegal but well-intentioned home invasion. When one of her new besties is arrested for the murder, Mia is the only one with the skills to ferret out the real killer. But she can’t afford to resurrect her morally flexible past. Can Mia keep her life on the straight and narrow with so much at stake? Mia has to step up, or she’ll lose her chance for the life she’s always wanted and the friends she’s never had. Even worse, she might wind up dead…

What Readers are Saying: “This book kept me smiling for days. A funny murder mystery with Mia, her cat and an assortment of crazy friends in a small lake town. It’s a wild ride you don’t want to miss.” – Txlamb, B&N Reviewer

B&N Press Top eBooks to Read this Summer!
Previous Previous Post: 20 Christmas In July Books to Read Right Now
Next Post: The Truth About Queer History in Romance Next