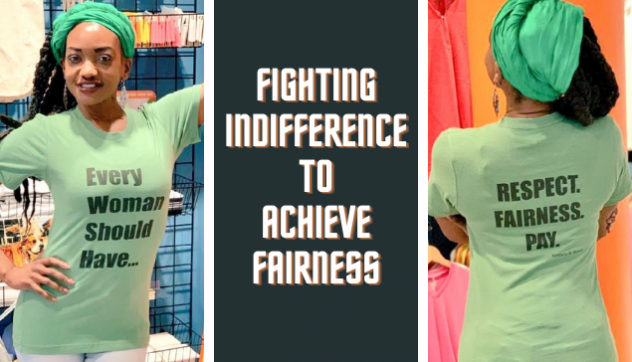 As a child, I was taught the importance of accepting people for who they are regardless of skin color or gender. It is about respect for all. As a woman, that valuable lesson is still very important. Thankfully, I had healthy examples of such relationships throughout my lifetime.

Throughout my professional career I have been blessed to establish healthy business relationships. There are a few individuals who have nurtured my craft and growth as a creative as well as an entrepreneur. Which is why I was completely distraught by the countless acts of mistreatment as well as injustices I have encountered the past few years of my career as the result of standing up for my rights.

As a creator, writer, and producer, who previously wrapped my first television series, I was very excited to embark on a new production. Full of excitement and momentum, after the first pilot production, I immediately started the journey on my second show. However, the experience was not as welcoming. It was during this production I discovered that racism and inequality towards minority women was still a true issue that affects the workplace; civil rights are still an uphill battle, and there is still a lot of work to be done in our country regarding discrimination because of race and gender. As a woman of color, I can attest to my own experiences what such injustices entails, which includes harassment and even retaliation for no reason at all.

Nonetheless, the second production had already taken a crucial turn. It became inevitable that standing up for my morals and beliefs were also part of this journey. It was also during this time of unforeseen circumstances and uncertainty I decided that my silence was no longer serving me. To better communicate my advocacy, I started utilizing social media channels, building a website and blog as well as launching a social justice petition to raise awareness about my experiences.

It is an extremely daunting task having to speak about very uncomfortable and traumatic situations. Which is why I also turned to writing and self-publishing. And through social media, I was truly able to raise my voice.

I created #AttacktheProblem as prominent force in using my voice through social media to spread truth about my message. I am now more adamant about encouraging young adults to get involved in social justice awareness and fighting for causes that help others.

Using my platform and self-publishing skills for storytelling was a scary endeavor. It was certainly a lonely road, which I had never traveled before. The truth of the matter is everyone will not always be in support of your mission or fight for justice.

Three tips to using self-publishing for good are:

As a woman, and especially an African American woman who has maintained a career in the public eye for over a decade, I believe there is an urgency for more discussion about discrimination, hate, inequality and other acts which create barriers and cause harm.

As a celebrated national journalist whose observed how easily social media can project negativity and violence, I am and have always been committed to projecting messages that produce quality living and hope.

The world will not change overnight, and opposition will arise. But there is a such thing as resolution. This is an essential element more often we as humans should strive to achieve in handling differences.

I encourage all B&N Press writers as well as readers to chart the path of using their voice – whether through publishing a book or a social media post – for good. We have the chance now to channel dialogue to provide positivity, growth, and change.

About Kimberly B. Brown

Ms. Brown first self published book “Reflections – What Ms. Angelou Taught Me” highlighted her life as youth growing up in the inner city of Baltimore to dreams fulfilled as a writer working in the entertainment industry.

Recently, Ms. Brown launched a podcast series “Shut Up” which previously aired at top and trending on Messy FM platform.

Currently, Ms. Brown is finishing up her second book “Defining Obsession”, current working title, due out late summer 2021, about a creative journalist and  woman who was stalked and endured hate crimes as the result of a terminated business relationship.

In addition, Ms. Brown is speaking publicly about all things women’s rights as well as advocating for women of color mistreated in the workplace, which led to launching a human rights initiative.

Aside from fighting for human rights in the entertainment and sports industries, Ms. Brown is adamant about a nurtured future full of prosperity,  wholeness and wealth.

Connect with Kimberly B. Brown

Kimberly B. Brown: They Key to Finding Your Own Voice